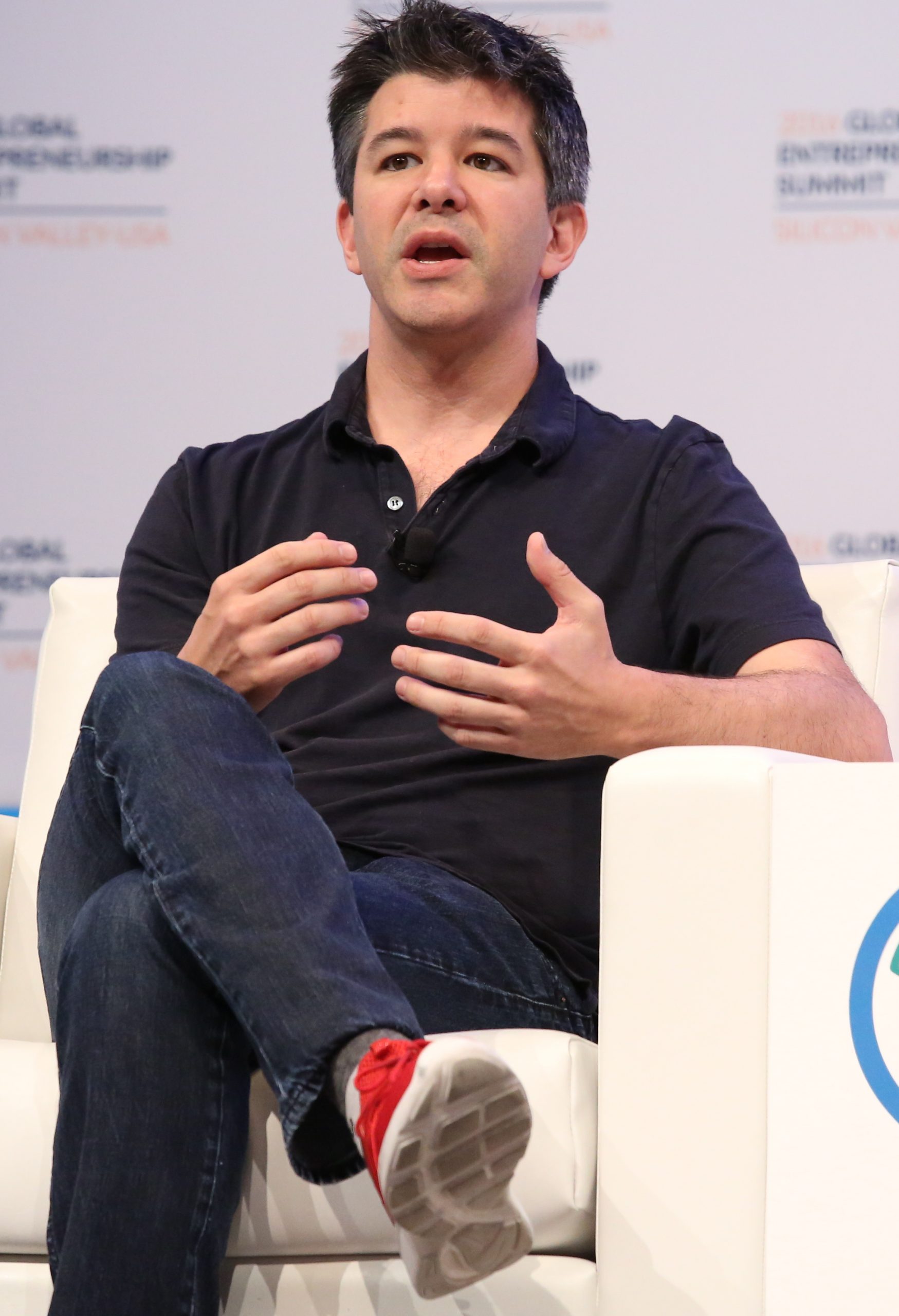 Travis Cordell Kalanick (/ˈkalənɪk/; born August 6, 1976) is an American billionaire businessman. He is the co-founder of Scour, a peer-to-peer file sharing application; Red Swoosh, a peer-to-peer content delivery network; and Uber, a transportation network company. Red Swoosh was sold to Akamai Technologies in 2007. Kalanick is the co-founder and former CEO of Uber, a position he held from 2010 to 2017. He resigned from Uber in 2017, after controversy over the company’s reported unethical culture, including allegations that he ignored reports of sexual harassment at the company. In the weeks leading up to a December 24th, 2019 announcement that he would resign his Board seat effective December 31, Kalanick sold off approximately 90% of his shares in Uber.

Kalanick is ranked 238th on the Forbes 400 list of richest Americans, with a net worth of $3.1 billion.

Kalanick was born on August 6, 1976 and grew up in Northridge, California. Kalanick’s parents are Bonnie Renee Horowitz Kalanick (nee Bloom) (died 2017) and Donald Edward Kalanick. Bonnie, who was Jewish, worked in retail advertising for the Los Angeles Daily News. Donald, from a Slovak-Austrian Catholic family whose grandparents immigrated to the United States, was a civil engineer for the city of Los Angeles. Kalanick has two half-sisters, one of whom is actress Allisyn Ashley Arm’s mother Anji, and a brother, Cory, who is a firefighter. Kalanick’s mother, Bonnie, died in a boating accident May 26, 2017.

Kalanick studied computer engineering and business economics at the University of California, Los Angeles. While studying at UCLA, Kalanick was a member of Theta Xi fraternity and started his first business, an online file-exchange service called Scour. In 1998, he dropped out of UCLA to work at the start-up full-time.

In 1998, Kalanick, along with Michael Todd and Vince Busam, dropped out of UCLA to help Dan Rodrigues found Scour Inc., a multimedia search engine, and Scour Exchange, a peer-to-peer file sharing service. In 2000, the Motion Picture Association of America (MPAA), the Recording Industry Association of America (RIAA), and the National Music Publishers Association (NMPA) brought a $250 billion lawsuit against Scour, alleging copyright infringement. In September 2000, Scour filed for bankruptcy to protect itself from the lawsuit.

Kalanick has an archived blog, Swooshing, where he shares struggles during this time. This included living over three years without a salary, moving into his parents’ house in 2001 (which he told the Failcon 2011 audience and commented that he “wasn’t getting ladies. It sucked.”), owing “$110,000 to the IRS in un-withheld income taxes, which is a white-collar crime that pierces the corporate shell, and it doesn’t matter whether you knew or not. If you’re an officer of the company you’re going to jail,” witnessing “all but one of the company’s engineers” leaving (who eventually also departed), and moving to Trivandrum (India) and Thailand as a cost-saving measure. Kalanick committed tax & securities fraud and perjury during the IRS investigation, blaming his partner Michael Todd, but neither were prosecuted. In 2007 Akamai Technologies acquired the company for $19 million.

In 2009, Kalanick joined Garrett Camp and gives him “credit for the original idea” of Uber. Camp, co-founder of StumbleUpon, spent $800 hiring a private driver with friends and had been mulling over ways to decrease the cost of black car services (meaning, taxis that are dispatched by a central service rather than hailed directly on the street) ever since. He realized that sharing the cost with people could make it affordable, and his idea morphed into Uber. “Garrett is the guy who invented that”, Kalanick said at an early Uber event in San Francisco. The first prototype was built by Camp, and his friends, Oscar Salazar and Conrad Whelan, with Kalanick being brought on as a “mega advisor” to the company. In October 2010, Kalanick succeeded Ryan Graves as CEO, who had held the position for ten months.

On June 13, 2017, it was announced that Kalanick would take an indefinite leave of absence from Uber. His responsibilities would be assumed by his direct reports in the organization.

On June 20, 2017, Kalanick resigned as CEO after 5 major investors, including Benchmark Capital, reportedly demanded his resignation. Despite his resignation, Kalanick was to retain his seat on Uber’s board of directors. Dara Khosrowshahi took his position of CEO in August 2017.

On December 24, 2019 Kalanick announced his resignation from the Board effective December 31, 2019. In the weeks leading up to this announcement Kalanick sold off more than $2.5 Billion of Uber stock holding which was about 90% of his shares.

Despite CTO Thuan Pham’s 2016 internal email to employees commenting, “I will not even utter the name of this deplorable person because I do not accept him as my leader” on the election of U.S. President Donald Trump, which was widely circulated and published by the media, in December 2016, it was announced that Kalanick joined other CEOs, including Tesla CEO Elon Musk, JPMorgan CEO Jamie Dimon, General Motors CEO Mary Barra, Disney CEO Bob Iger, Walmart CEO Doug McMillon, and former General Electric CEO Jack Welch, as an economic advisor on Trump’s Strategy and Policy Forum, organized by Blackstone’s Stephen Schwarzman. Kalanick vocally opposed President Trump’s executive order banning travel from select countries and believed that remaining on Trump’s advisory council would provide him with the opportunity to directly address his concerns with the President and advocate for immigrants. In an Uber blog post, Kalanick stated that he wanted to use his position on the council to “give citizens a voice, a seat at the table.” However, after continued pressure, Kalanick announced in an email to Uber employees that he would step down from the council.

In 2017, it was reported that Kalanick had knowledge of sexual harassment allegations at Uber and did nothing. In the same week, he asked his direct report, Uber’s SVP of Engineering Amit Singhal, to resign after a month for failing to disclose a sexual harassment claim during Singhal’s 15 years as VP of Google Search, after Recode reported about it in media. According to Reuters, he has “a reputation as an abrasive leader”.

In February 2017, a video was released where Kalanick was shimmying between two women in an UberBLACK, before arguing with an Uber driver during a heated debate in which he berated the driver.

In March 2017, Uber VP of Business, Emil Michael contacted Kalanick’s ex-girlfriend in an attempt to silence her into hiding an HR complaint. This backfired, with her speaking to The Information as a source present during an executive team outing with Kalanick, where Michael and four more Uber managers selected numbered women at a Korean escort bar, prompting a complaint one year later, by the female manager who attended. She also has since spoken to Businessweek about Uber’s India rape case.

On August 10, 2017, Axios reported that Benchmark was suing Kalanick for “fraud, breach of contract and breach of fiduciary duty.” The suit is based on Uber’s decision to expand the number of board seats, with Benchmark arguing the decision is invalid due to withholding of material information prior to the vote. The lawsuit was very controversial in Silicon Valley because of the relationship between the founder and the investor. The court ruled in the favor of Kalanick to move the case to arbitration on August 30. In response to the court ruling Kalanick released a public statement:

Pleased that the court has ruled in his favor today and remains confident that he will prevail in the arbitration process. Benchmark’s false allegations are wholly without merit and have unnecessarily harmed Uber and its shareholders.

In January 2018, Benchmark dropped the lawsuit against Kalanick. The investment firm agreed to drop the lawsuit if Uber completed its transaction with Softbank, a prior condition Benchmark had agreed to. Completed in early January, Uber agreed to sell a sizable stake to SoftBank. The share purchase valued Uber at $48 billion.

On March 7, 2018, Kalanick announced via his Twitter account that he would start a venture fund, 10100 (pronounced ‘ten-one-hundred’), focused on job growth. The fund is likely named after the address of his childhood home. The fund is going to tackle large scale employment opportunities by investing in e-commerce, innovation and real estate in emerging markets like China and India.

To capitalize on the rapid growth of prepared-food delivery sector, in June 2018, Kalanick’s real estate investment company, City Storage Systems, took controlling interest in U.K.-based FoodStars, a “dark kitchens” start-up with over 100 locations throughout the London metropolitan area. Dark kitchens, also known as ghost kitchens, are purpose built facilities that are leased to restaurants to prepare food for delivery, off-site from their full-service/walk-in location. Ghost kitchens also allow “virtual restaurants” (those with no full-service location) to launch brands and offer delivery-only service. City Storage Systems ghost kitchen business operates under the name Cloud Kitchen. In November 2019, the Wall Street Journal reported that Saudi Arabia’s sovereign wealth fund completed an agreement with CloudKitchens in January 2019 to invest $400 million in the company. Kalanick himself has invested $300 million in the startup.

Kalanick serves on an advisory board for Neom, Saudi Arabia’s plan to build a futuristic “mega city” in the desert.

Kalanick bought a townhouse in the upper hills of San Francisco’s Castro neighborhood, which was nicknamed “the Jam Pad” and had its own Twitter account.