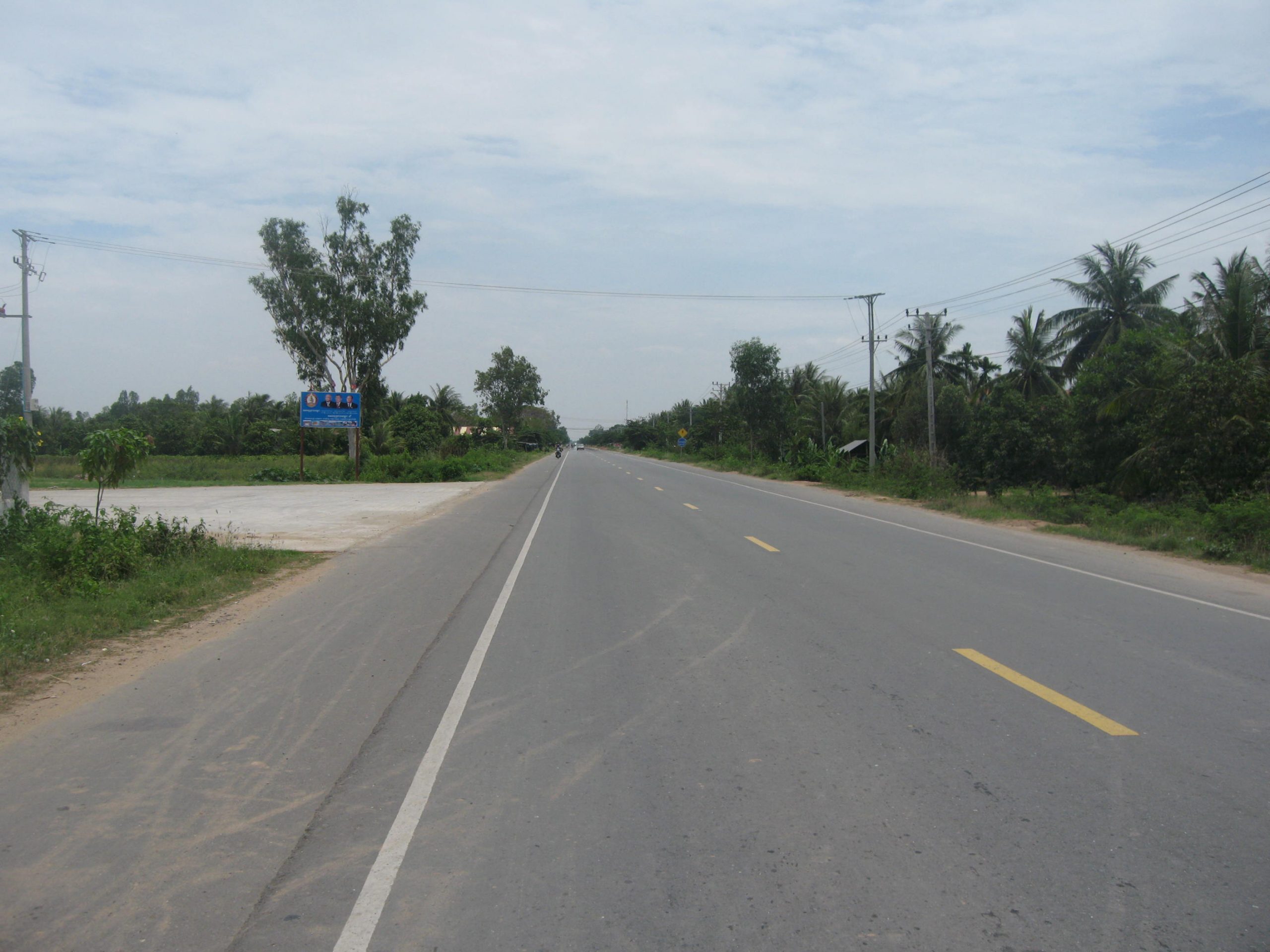 The system of Transport in Cambodia, rudimentary at the best of times, was severely damaged in the chaos that engulfed the nation in the latter half of the 20th century. The country’s weak transport infrastructure hindered emergency relief efforts, exacerbating the logistical issues of procurement of supplies in general and their distribution. Cambodia received Soviet technical assistance and equipment to support the maintenance of the transportation network.

Of the current total roadway network, only about 50% of the roads and highways are hard surfaced, all-weather, and in good condition. About 50% of the roads were constructed of crushed stone, gravel, or compacted earth. Secondary roads are of unimproved earth or were little more than tracks. In 1981 Cambodia opened a newly repaired section of National Route 1 which runs southeast from Phnom Penh to the Vietnamese border. The road, which suffered damage during the war years, was restored most probably by Vietnamese army engineers.

In the late-1980s, Cambodia’s road network was both underutilized and unable to meet even the modest demands placed upon it by an preindustrial agrarian society. Commercial vehicles, such as trucks and buses, were insufficient in number and lacked the spare parts necessary to keep them running. Road construction and maintenance were ignored by a financially hard-pressed governments, while insurgents regularly destroyed bridges and rendered some routes unsafe for travel.

Cambodia is upgrading the main highways to international standards and most are vastly improved from 2006. Most main roads are now paved. And now road construction is on going from the Thailand border at Poipet to Siem Reap (Angkor Wat).

Motorcycles are by far the most common transport medium in Cambodia. “Cyclo” (as hand-me-down French) or cycle rickshaws were popular in 1990s but are increasingly replaced by remorques (carriages attached to motorcycles) and rickshaws imported from India. Cyclos are unique to Cambodia in that the cyclist sits behind the passenger(s) seat, as opposed to cycle rickshaws in neighbouring countries where the cyclist is at the front and “pulls” the carriage. With 78% mobile phone penetration rate, ride-hailing apps have become popular in recent years. The first locally owned ride-hailing app, ExNet taxi app, was launched in 2016, after which another locally developed PassApp taxi was also introduced. The ExNet and PassApp use the same technology and architect for their application, except that ExNet is a taxi-based ride-hailing service while PassApp is more of rickshaw-based one. Uber and Grab joined the market in 2017. The entry and later merger of Uber and Grab did not negatively affect the local apps as the locals have the first-mover advantage and could secure a large number of patrons. As of today, PassApp is seen as an able competitor for the Singapore-based Grab in the Cambodian transport market.

Aside from the private-hire vehicles and ride-hailing service, public transport is also available but only in the capital. Phnom Penh city bus service started in 2015 with only three routes under the assistance of JICA. Today, Phnom Penh City Bus operates 13 routes.

Two rail lines exist, both originating in Phnom Penh and totaling about 612 kilometers of 1,000 mm (3 ft 3 3⁄8 in) metre gauge single track.
The first line or the northern line, built by The French colonial government, running from Phnom Penh to Poipet on the Thai border, between 1930 and 1940, with Phnom Penh Railway Station opening in 1932.
The final connection with Thailand was completed by Royal State Railways in 1942. However, the service from Bangkok to Battambang was suspended when the French Indochinese Government resumed sovereignty over Battambang and the Sisophon area from Thailand on 17 December 1946, as Thailand was seen as a supporter of Khmer Issarak, the anti-French, Khmer nationalist political movement.
A third line is planned to connect Phnom Penh with Vietnam, the last missing link of the planned rail corridor between Singapore and the city of Kunming, China. A new north-south line is also planned. The lines from Phnom Penh to Sisophon and from Sisophon to Poipet have been rehabilitated; starting with Poipet to Srey Sisophon in April 2018 and Sisophon to Phnom Penh in early July (2018). The active part, the southern line, of the network is the Phnom Penh-Sihanoukville line, with stops at Takeo and Kampot. The first line to be re-opened in Cambodia was the 118 km long route from Phnom Penh to Touk Meas and the complete southern line in May 2011 (or Toll Royal Railway). Toll Royal Railway (Cambodia) had been given a 30-year concession from The Royal Government of Cambodia to operate Cambodia’s railway network.

The nation’s extensive inland waterways were important historically in domestic trade. The Mekong and the Tonle Sap Rivers, their numerous tributaries, and the Tonle Sap provided avenues of considerable length, including 3,700 kilometers navigable all year by craft drawing 0.6 meters and another 282 kilometers navigable to craft drawing 1.8 meters. In some areas, especially west of the Mekong River and north of the Tonle Sap River, the villages were completely dependent on waterways for communications. Launches, junks, or barges transport passengers, rice, and other food in the absence of roads and railways.

According to the Ministry of Communications, Transport, and Post, Cambodia’s main ferry services crossing the Bassac River and the middle Mekong River were restored in 1985. The major Mekong River navigation routes also were cleared for traffic. Seaplane service to all waterways and islands in now offered by Aero Cambodia Airline.

Cambodia has two major ports, Phnom Penh Port and Sihanoukville Port, also known as Kampong Som, and five minor ports. Phnom Penh, at the junction of the Bassac, the Mekong, and the Tonle Sap Rivers, is the only river port capable of receiving 8,000-ton ships during the wet season and 5,000-ton ships during the dry season. In 2018 the port received 205,000 TEUs totalling 2.9 million tonnes. Its 2018 profits were US$7.35 million, up 36% from 2017.

Sihanoukville port reopened in late-1979. It had been built in 1960 with French assistance. In 1980 some 180 Soviet dockworkers, having brought with them forklifts and trucks, were reportedly working at Kampong Som as longshoremen or as instructors of unskilled Cambodian port workers. By 1984 approximately 1,500 Cambodian port workers were handling 2,500 tons of cargo per day. According to official statistics, Sihanoukville had handled only 769,500 tons in the four prior years (1979 to 1983), a level that contrasted sharply with the port’s peacetime capacity of about one million tons of cargo per year.

The country possesses twenty-six airfields, of which only thirteen were usable in the mid-1980s. Eight airfields had permanent-surface runways. Phnom Penh International Airport in Phnom Penh is the largest airport; it also serves as the main base for the renascent Cambodian Air Force.

The new national airline Cambodia Angkor Air was launched in 2009, with an investment from Vietnam Airlines. Aero Cambodia Airline started business in 2011 offering flights to all airports and waterways with seaplanes.