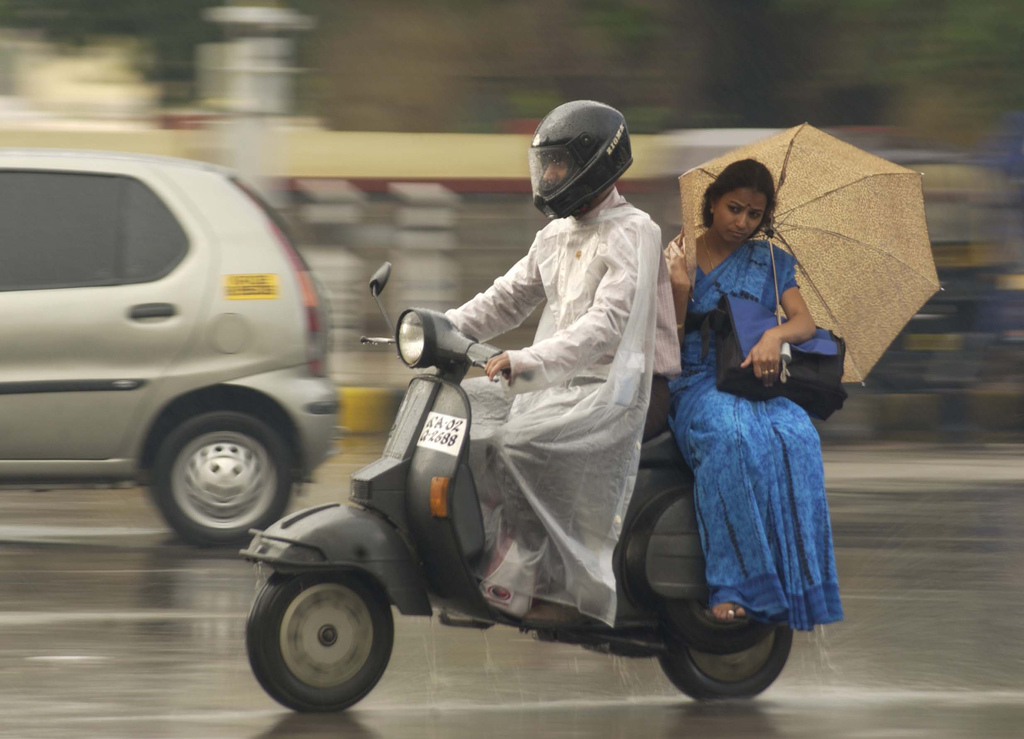 Transport in Bangalore consists of several intra-city commute modes such as BMTC buses, Namma Metro, taxis and auto rickshaws, as well as the inter-city forms of transport: KSRTC and private buses, trains, and flights.

Bangalore has a road network of 10,200 kilometers, with a road density (length of road per square kilometer) of 8.2 km, according to a report by Global Mobility Monitor Network. This road density is substantially lower than of that of India’s capital Delhi and cited as the reason for traffic congestion in the city. At the end of the 2018-19 financial year, Bangalore had more than 80 lakh vehicles registered in the city, the most in India after Delhi. Over 55 lakh two-wheelers (motorcycles) and 15 lakh cars together make up for close to 85 percent of the vehicles, while the public transport buses are around 6000 in number, less than 0.1 percent of the total vehicle population. In 2018, Bangalore was reported to have the second highest number of two-wheelers in the country. Bangalore’s car density (number of cars for every kilometer of road), however, was found to be 149 – much lower than other major Indian cities.

Bangalore Metropolitan Transport Corporation (BMTC) buses are the primary mode of public transport in Bangalore. As of September 2019, BMTC operates a fleet of 6023 buses and has a daily ridership of 35.8 lakh. A majority of BMTC’s bus routes originate or terminate at either Kempegowda Bus Station or K. R. Market.

In 2006, BMTC became the first state road transport undertaking to utilize air-conditioned buses for intra-city transport. As of 2019, BMTC has 825 air-conditioned Volvo buses branded as “Vajra”. Several tech parks and groups of companies in the city have partnered with BMTC to provide dedicated bus routes, such as ORRCA, for their employees in order to reduce vehicular traffic. BMTC also operates air-conditioned “Vayu Vajra” buses from different parts of the city to the Kempegowda International Airport. These buses have fewer stops compared to other bus routes.

BMTC issues different types of bus passes for its passengers including yearly student passes, monthly and daily passes. A survey conducted in 2019 found that nearly 48 percent of BMTC passengers have bus passes.

The number of registered cabs in Bangalore was reported to be 1.66 lakh in November 2018, having doubled from 2015. This increase was attributed to the rising popularity of app-based taxi-hailing services such as Ola Cabs and Uber, which have “revolutionised” transport in the city while contributing to the increase in traffic. Taxi services, along with Namma Metro, caused the decline in BMTC and rickshaw ridership, according to a report in the The Times of India.

Prior to the entry of Ola Cabs and Uber, Bangalore had taxi services such as Meru Cabs, KSTDC and Mega Cabs. Meru Cabs started plying in 2007, whereas the government-owned KSTDC entered the industry in 2009, providing taxis to and from the airport, in partnership with the Bangalore International Airport Limited.

Some companies also operated bike taxis in Bangalore but the state transport department deemed them to be illegal.

Auto rickshaws are used in the city for traveling short distances. As of January 2019, Bangalore has 1.94 lakh auto rickshaws, out of which more than 25,000 are two-stroke rickshaws. Two-stroke rickshaws, which are said to be a major cause of sound and air pollution, will be allowed to ply only until 2020. Rickshaw drivers in the city are known to charge the customer extra and seldom use the meter. In 2014, Ola Cabs introduced on-demand rickshaw hailing services on its platform, making Bangalore the first city to get “Ola Auto”.

As of 2017, the city does not have permission to run electric rickshaws (e-rickshaws) which are smaller than normal auto rickshaws and have a maximum speed of 25kmph. Bangalore Traffic Police stated that, although eco-friendly, e-rickshaws “would slow down vehicular movement.”

Bangalore’s Namma Metro rapid transit system began construction in 2008 and operation in 2011, after missing several deadlines. As of 2019, it has 40 operational stations across two lines (Green Line and Purple Line), covering a distance of 42.3 km. Several stations are under construction as part of Phase 2 on these two lines, with Yellow, Red and Blue Lines also proposed. The Metro runs six-car and three-car trains which have total capacity of 2002 and 975 respectively. The average daily ridership was reported to be 4.5 lakh in 2019.

Namma Metro has seen a steady growth in passenger footfall and popularity since 2017. However, the compartments are reported to be highly crowded during peak hours, despite addition of more trains during such time. There have been claims that Metro has caused road traffic congestion around its stations due to a lack of efficient last-mile connectivity.

A 148-kilometer suburban rail network project has been proposed and is waiting Union Cabinet’s approval as of November 2019. The network will have four corridors viz, KSR-Devanahalli, Chikkabanavara-Yeshwanthpur-Baiyappanahalli, Heelalige-Yelahanka-Rajanukunte and Kengeri-KSR-Whitefield.

The Karnataka State Road Transport Corporation (KSRTC), headquartered in Bangalore, runs inter-city buses from the city to various parts of Karnataka as well as neighbouring states. It launched air-conditioned buses in 2002-03 under the brand name “Airavat”; these buses are either seater or sleeper, which are manufactured by Volvo, Scania and Mercedes-Benz among others.

Apart from KSRTC, a number of private operators ply buses from Bangalore to different parts of South India. According to a 2012 report in The Hindu, more than 6000 buses belonging to KSRTC, NWKRTC, NEKRTC and other states’ RTCs, as well as 2000 private buses run from Bangalore to other cities.

Bangalore is part of the South Western Railway zone of the Indian Railways and is well connected to various parts of the country by rail network. The city has three main railway stations viz., Bangalore City, Yeshwanthpur and Bangalore Cantonment.